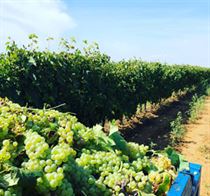 The farm Casale Cinque Scudiwas founded in 1985, is located in the municipality of Aprilia (LT) and more precisely in "Le Ferriere." The company consists of approximately 57 hectares fully planted with vineyards owned by the Mariani family vineyard experts since 1886.

The "Cinque Scudi" began about 10 years ago, more precisely in March 2003 when the youngest of the family after much research found some historical notes saying, in short, "after the pontificate of Pius IX, before it was introduced the lyre, the last Cinque Scudi (Five Shields), it is said that they were used to buy all the production of fine wine destined for ecclesiastical functions. From that moment on, the wines from that area were called: "Cinque Scudi".
From there was born the idea of believing in this project and in fact Daniele Mariani, owner of the company in its bottles at the end uses this phrase: "A nothing would be worth anything if the bottom of the root of 'winemaker' life had not taken that passion that animates this my job".

The company produces different kinds of grapes, but only a few are selected and vinified to achieve certain quality products aimed exclusively at oreca channel. The company today can produce about two hundred thousand bottles, but is being expanded and expects to achieve great things in the coming years.